In 1945, when a fellow chaplain opposed Jewish participation in the religious service dedicating the 5th Marine Division Cemetery at Iwo Jima, Rabbi Roland Gittelsohn ended up giving his eulogy to a much smaller group of Jewish Marines. However, his call for tolerance and unity ended up being heard round the world:

We dedicate ourselves, first, to live together in peace the way they fought and are buried in this war. Here lie officers and men, Negroes and whites, rich men and poor, together. Here, no man prefers another because of his faith or despises him because of his color. Here, there are no quotas of how many from each group are admitted or allowed. Among these men there is no discrimination, no prejudices, no hatred. Theirs is the highest and purest democracy. 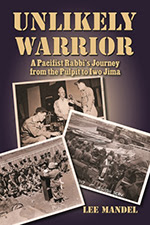 During the 70th anniversary of the Battle of Iwo Jima, Lee Mandel will be at the National Museum of American Jewish Military History to discuss his new biography of Chaplain Roland Gittelsohn, Unlikely Warrior: A Pacifist Rabbi’s Journey from the Pulpit to Iwo Jima.

A brilliant student, orator, and debater, Rabbi Roland Gittelsohn was an outspoken social activist and frequent lecturer on political topics during the 1930s. Despite his passionate support of pacifism, Gittelsohn voluntarily joined the navy when the United States entered World War II, becoming the first Jewish chaplain assigned to the United States Marine Corps. Gittelsohn’s remarkable story, told here from his surviving notes, chronicles the evolution of his crisis of conscience and gives an insider’s view into the Battle of Iwo Jima.

Author Lee Mandel’s research provides an unprecedented look at how the U.S. Navy took clergymen of all religions and molded them into a highly effective support force for America’s fighting forces. 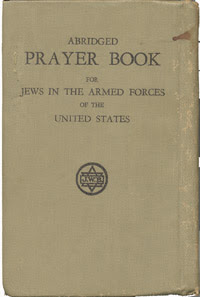 The Jewish Welfare Board began publishing religious books for American Jewish service members during the First World War and recently issued a new version of their prayer book.

Michael Bloom will discuss the history of the siddur (prayer book) in the military.

The National Museum of American Jewish Military History is at